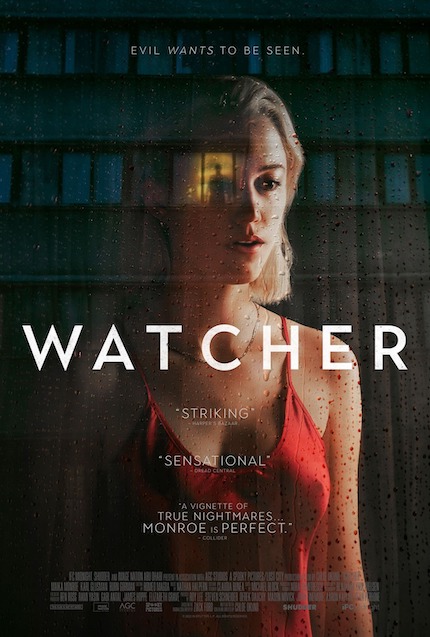 Almost 70 years after Alfred Hitchcock’s Rear Window debuted in movie theaters, it remains the ur-text, the template or formula for practically every premise-borrowing film that’s followed in its wake.

Any film, like writer-director Chloe Okuno’s (Slut) feature-length debut, Watcher, can’t escape comparisons to Hitchcock’s masterpiece (to be fair, no film released since has or will), but elevated by a creepily effective performance by long-time character actor Burn Gorman as the title character, Okuno offers enough mood, atmosphere, and subtext to match the usual twists, turns, and switchbacks to make the Bucharest-set Watcher a modestly rewarding viewing experience for enthusiasts of methodical, slow-burning psychological-thrillers.

When we first meet Julia (Maika Monroe, Independence Day: Resurgence, It Follows), an American ex-pat who has joined her partner, Francis (Karl Glusman), in Bucharest to help advance his professional career, she’s riding along in a cab while the male driver makes unwanted comments about her physical appearance.

It’s the first, but not the last time, Julia will encounter the unwanted attention of or attention from men in Bucharest. While the half-Romanian Francis weakly jumps to her defense, he deliberately sidesteps any confrontation with the driver, a sign of Francis’s conflict-avoiding, get-along-to-go-along personality that ultimately threatens the long-term health and security of his relationship with Julia.

Leaning heavily into Julia’s unfolding experience as a typical ‘stranger in a strange land,’ made all the stranger because Julia doesn’t speak Romanian beyond a handful of words, Okuno explores Julia’s increasing malaise and growing despondency via the latter’s loosely structured daily sojourns into a semi-desolate Bucharest (Okuno shot Watcher on location during the pandemic).

Without any kind of plan for her days, Julia wanders around and through Bucharest, ever mindful of her isolation as a mono-lingual American in a foreign country, only returning in the early evenings to welcome Francis home after a busy, if ill-defined, day at his new job. All but ignoring Julia and her needs and feelings, Francis complains vaguely about a difficult, demanding new boss. Not surprisingly, Julia in turn feigns interest.

All that free, unstructured time means Julia can engage any train of thought, any fantasy, regardless of its connection to reality, when she’s not with Francis in their apartment, hosting get-togethers for his co-workers, or functioning as a well-dressed prop at a company event. The first hint of existential dread enters Julia’s life though a silhouetted figure, the “watcher” of the title, she repeatedly spots from her window.

Unmoving and shrouded in darkness, the presence of the figure offers the first real hint not just of a potential danger in Julia’s life, but that viewers have entered different genre territory. Eventually, the watcher stops watching and Julia begins encountering him in seemingly innocuous locations, from a movie theater playing Stanley Donen’s Charade to a local supermarket where he appears around every corner.

Character-wise, Francis represents the kind of well-meaning, earnest man almost pathologically obsessed with observing social niceties and norms, regardless if observing those niceties or norms mean ignoring potential danger. With Francis all but useless, Julia naturally turns to an English-speaking neighbor, Irina (Madalina Anea), for comfort and eventually assistance.

Julia encounters repeated resistance and/or gaslighting from the men around her just as the watcher hovers at the edges of her life. Unsurprisingly, sensationalistic news reports of a serial killer stalking and murdering women in and around Bucharest don’t help Julia’s increasingly unstable state-of-mind.

Watcher certainly doesn’t suffer from a lack of ideas, including Julia’s isolation, dislocation, and alienation as stands-in for a cautionary tale about women moving through a hostile, predatory, male-run world. Julia’s senses, raised to heightened situational awareness, function as a not particularly subtle metaphor for the real world.

Those concerns, of course, eventually fall away as Watcher embraces its long-delayed thriller promise in the final moments. There, at least, Okuno delivers a modicum of thrills, chills, and even a dollop of blood-stained gore. For some viewers with slightly higher horror-related expectations, though, that may be too little too late.