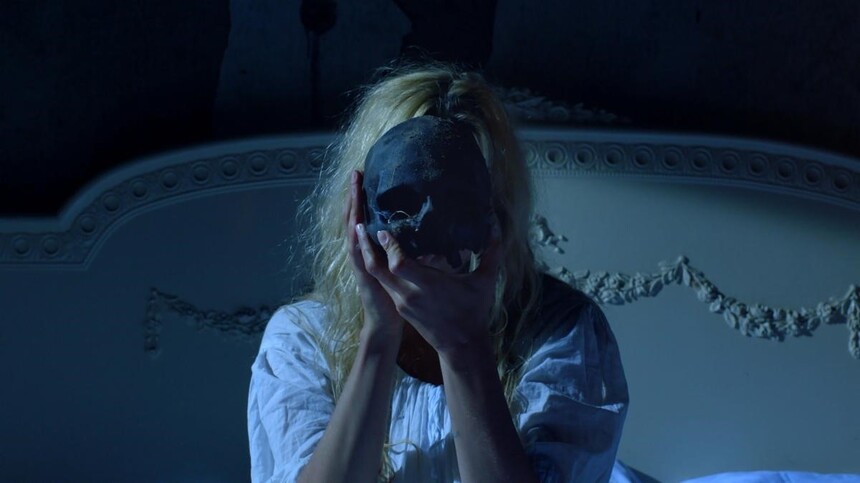 For the Menliffs, like the audience, the slightly run-down, empty castle represents the beginning of their journey and not their end. In broad, but no less effective, strokes, Kopacka deftly establishes the fraught, fracturing nature of a relationship teetering on irrevocably imploding into bitter recriminations and most likely, violence.

Given the apparent late 60s or early 70s setting, it quickly becomes clear that Dieter and Margot represent diametrically opposed world-views: Dieter as a paragon of white male entitlement (i.e., patriarchy) and Margot a rising, independent feminism. Kopacka gives us the first hint of conflict on the drive to the castle, emphasizing the larger conflict to come in Dieter’s preference for a three-piece suit both at night and when he awakens in the morning.

Margot’s formal wear suggests a night out at the theater or an expensive dinner, but not the kind of straightjacketed, conforming confines of Dieter’s suit. Within moments, they go their separate ways, Dieter to explore the basement/wine cellar, Margot to investigate the remainder of the castle, a lit candelabra in hand. It’s the kind of scene instantly familiar to Euro-Horror fans, signaling the potentially mortal danger neither onscreen character perceives until it’s too late.

Almost immediately, Dieter proves himself less the hero of his own story or Dawn Breaks Behind the Eyes than his cowardly opposite, dropping his keys in the wine cellar, and fleeing at the first sign of something the audience doesn’t see. Kopacka pulls out equally familiar elements when Margot peers into a dusty mirror that reveals something ominous about the castle and its previous and/or future inhabitants.

Before long, however, Dieter emerges deeply shaken from an unseen encounter the wine cellar, a bullwhip in hand (a fetishistic object most likely borrowed from Mario Bava’s The Whip and the Body), portending the next, seemingly inevitable, scripted step in their disintegrating relationship.

That, however, only takes us through roughly the halfway mark. Working from a screenplay he co-wrote with Lili Villányi, Kopacka purposely resets Dawn Breaks Behind the Eyes, introducing a new, equally fraught couple, Eva Ziehnagel (Anna Platen) and Gregor Grause (Jeff Wilbusch), subsequently forcing the audience to rethink and recontextualize everything they’ve seen, heard, and experienced before. It’s a daring, risky move, likely to alienate a significant subset of his audience, but it also makes Dawn Breaks Behind the Eyes a far more engaging, intriguing film, exchanging the overt, maybe even heavy-handed conflict between Dieter and Margot to a more subtle one between Eva and Gregor that removes the violence, but keeps the core, central issue (i.e., patriarchy vs. feminism), albeit with less of a threat of violence.

While sometimes obliquely, occasionally elliptically exploring his themes and ideas, Kopacka and his cinematographer, Lukas Dolgner, deliver a series of retina-burning images and impressively staged set pieces, each time moving away from the semi-grounded realism of the early scenes to incandescently hallucinogenic, nightmarish fantasy that ends quite differently than it began. A limited budget, however, likely led to a too-brief 76-minute running time.

In turn, that limited running time meant that the overall impact or effect of the visual style or Kopacka’s ideas slip into near incoherence or unintelligibility as a result. Hopefully, a more than modest budget the next time Kopacka writes and directs will be free of that particular issue.

Dawn Breaks Behind the Eyes will be available via VOD platforms on Friday, June 24.

Dawn Breaks Behind the Eyes