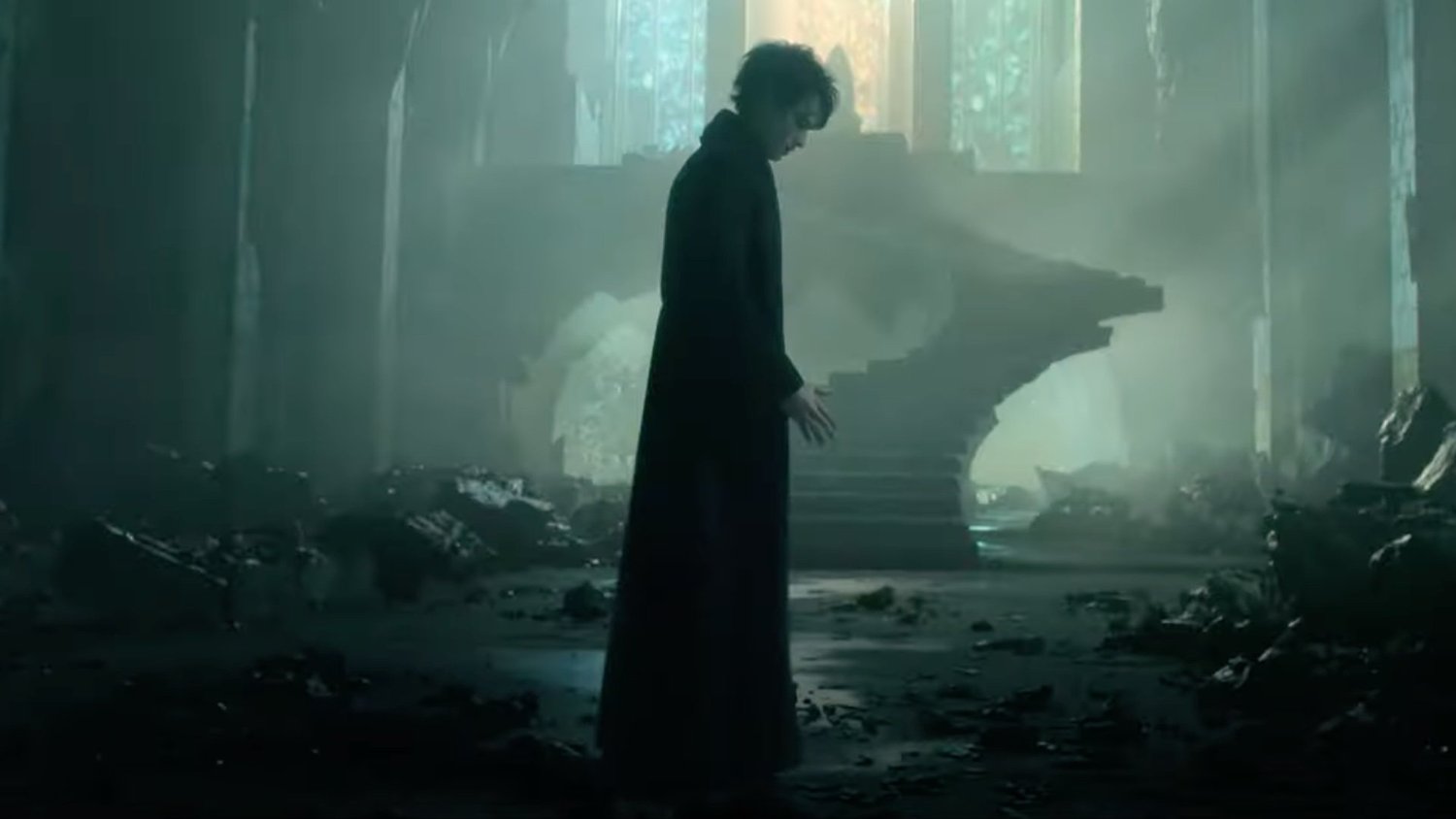 For the most part, fans seem pretty excited about Netflix’s live-action series adaptation of Neil Gaiman’s The Sandman. The most recent trailer that was released presented the show as a beautifully made fantasy epic.

In the series: “There is another world that waits for all of us when we close our eyes and sleep — a place called the Dreaming, where The Sandman, Master of Dreams (Tom Sturridge), gives shape to all of our deepest fears and fantasies. But when Dream is unexpectedly captured and held prisoner for a century, his absence sets off a series of events that will change both the dreaming and waking worlds forever. To restore order, Dream must journey across different worlds and timelines to mend the mistakes he’s made during his vast existence, revisiting old friends and foes, and meeting new entities — both cosmic and human — along the way.”

Gaiman wanted to make sure to get this adaptation right. There have been several attempts over the years to adapt The Sandman and in a recent interview with Total Film, Gaiman said that he “didn’t have faith that we’d always get here.” He had faith, though, and when talking about his goal for the series, he said:

“But I had faith that the important thing was to stop bad versions being made. Once a bad version is made, you never quite come back from that. It may sound silly, but when I was 14 or 15, my favorite comic was Howard The Duck. Steve Gerber, Gene Colan, Frank Brunner, satire, madness, glory… I was so excited when I heard George Lucas was making a movie. And then A New Breed Of Hero [the 1986 movie’s alt-title] came out. Howard The Duck became a bad joke. I never wanted that to happen to Sandman and I saw scripts that would have made that happen.”

In the end, though, Gaiman seems very happy and pleased with the outcome. He called the series “magic” but also says that it might not be the “Sandman of your dreams”. He said:

“I can’t promise this is the Sandman of your dreams, but I can promise I’m proud of what we’ve done. I can say that Stephen Fry as Gilbert is waiting for you, Boyd Holbrook as the Corinthian, the serial-killers’ convention… We also get to punch above our weight on casting, because there are people who love Sandman and desperately want to be in it. Everybody is on Sandman because they love it. And it’s magic.”

The Sandman launches on August 5th on Netflix. Here’s a new photo:

Box Office Predictions: With the arrival of Elvis & The Black Phone, five films could gross $20M+ this weekend

Apple TV+ has officially announced that the Jason Momoa-led action sci-fi drama See will be concluding its run with the upcoming eight-episode third season, which will start streaming on August 26. The official See season three teaser has also been unveiled, teasing the final battle that Baba Voss must face in order to continue to protect his family.

“We are thrilled to share this epic final chapter of See, which delivers all the intense drama, riveting action, and heartfelt emotion fans have come to expect, as well as what we think is a deeply satisfying conclusion to our story,” showrunner and executive producer Jonathan Tropper said in a statement. “Building a world without sight was a particularly unique and continuous challenge that was met through the passionate and thoughtful collaboration of a phenomenally talented and diverse team both in front of and behind the camera. The show has been a monumental labor of love for all involved, and we are eternally grateful for the way See has been embraced by viewers around the world.”

“In Season 3, almost a year has passed since Baba Voss (Momoa) defeated his nemesis brother Edo and bid farewell to his family to live remotely in the forest,” reads the synopsis. “But when a Trivantian scientist develops a new and devastating form of sighted weaponry that threatens the future of humanity, Baba returns to Paya in order to protect his tribe once more.”

Fart jar girl and 90 Day Fiancé alum Stephanie Matto posts a before and after selfie to reveal how different she looks when she uses filters.

Former 90 Day Fiancé star and the internet’s beloved “fart jar girl” Stephanie Matto wowed her fans by showing a photo of herself without filters or Photoshop. Stephanie had tried her hand at being a child actor, writer, stripper, and YouTuber before being cast in 90 Day Fiancé: Before the 90 Days opposite her Australian girlfriend Erika Owens. Stephanie and Erika’s had the first same-sex relationship on 90 Day Fiancé ever, though some fans accused Stephanie of faking being bisexual. During the show, Stephanie documented her struggles with a rare blood disorder called aplastic anemia in which even a common cold could be disastrous.

But somehow, Stephanie never became a fan favorite during or after her season. In fact, the tag of a “clout chaser” refuses to leave her. Over the years, Stephanie has managed to make the best use of her 90 Day Fiancé fame by launching her OnlyFans account to post adult modeling content, or recently selling her fart jars online. Fans have remained skeptical of everything that Stephanie does, so her claims of selling fart jars at $200,000 have been called bogus. Stephanie’s hospitalization for farting too much and ending up having heart attack symptoms was just as unbelievable to some. And so was Stephanie suddenly having a huge toe in all of her Instagram photos.

Stephanie came clean about Photoshopping her toe to make it look bigger, but it’s possible that she made a good fortune from selling feet photos because of the curiosity it evoked. But it seems like Stephanie’s editing skills go beyond her toes, since she’s now revealed how she really looks without filters. During her honesty hour on Instagram, Stephanie shared two photos side by side of her before and after using filters. In her un-retouched Instagram selfie, the 90 Day Fiancé star pointed out the little bit of her “belly roll” and “sun-damaged skin.” Stephanie admitted that she edits her pictures because she is a “perfectionist.”

The Connecticut resident then asked her 303K-plus followers to truthfully tell her if they use filters or are against them. For those who liked what she was wearing, Stephanie shared a link to her fresh floral bathing suit. In her comments, Stephanie’s 90 Day: The Single Life co-star Natalie Mordovtseva, who’s also often called out for heavily editing her face and body to look slimmer, had something to say. “On both you look great (clapping emoji) (fire emoji),” Natalie told her 90 Day Fiancé friend Stephanie. To a different follower, who complained about the effects that staying out in the sun for too long has on one’s skin, Stephanie jokingly replied, “I’ll never stop.” Some fans told Stephanie that she needs to ditch the filters because she’s a natural beauty. But some followers were interested in knowing about the filter that Stephanie uses and her reply was, “faceapp and use the silk filter on setting 2 or 3.”

There’s no denying that Stephanie is hardworking and has made it to the top just by being innovative and creative in whatever she does. Not too long ago, Stephanie started selling bottles of her boob sweat on her adult content platform. But Stephanie’s account from TikTok was unfortunately removed since she was using it to promote her sweat business. But just like any other obstacle in her career, 90 Day Fiancé celeb Stephanie is sure to find a way out. She may continue to use filters on her face but it’s really her unfiltered approach toward life that gets her brownie points.

Next: 90 Day Fiancé: Why Stephanie Matto’s Proud Of Being A ‘Clout Chaser’

So yeah, just laying that out there right now. While the show did bring in some high ratings for Apple TV+, critics weren’t that impressed by “See” when it first premiered in 2019. The mediocre reviews are probably why the first and second seasons have such a steep rating increase on Rotten Tomatoes — while the second season has an 83% approval rating, the aggregate only recorded six reviews, a sharp decline from the 52 reviews processed for its first season.

The fact that exact ratings were never given for the show, despite Apple TV+ claiming it to be its most-watched returning drama as of September 2021, also bodes poorly. Streamers often don’t provide public viewership data for their original library, which isn’t a bad thing per se, but the claim isn’t nearly as impressive if it comes without any evidence. While I don’t doubt there are fans of the show, there might not have been enough to justify keeping it around much longer, considering it’s a high-budget show with a big-name star.

However, until Apple TV+ comes out and says that “See” ended at three seasons for a specific reason, the truth will not be known. That being said, it’s still fun to speculate. The third and final season of “See” premieres on August 26, 2022.